What Cecil the Lion did for Humanity 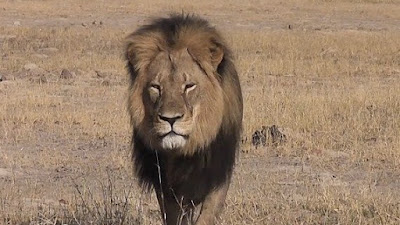 I, like millions of others am deeply saddened and angered by the execution of Cecil the lion. I volunteered in South Africa on a big five game reserve and spent time with lions daily. They are more majestic and regal in person than one could imagine. The thought of intentionally killing one of these creatures is beyond repugnant. Cecil's story has had some positive outcomes, however. It has brought a newfound awareness of trophy hunting, it has united a global community and opened the door to discussions of how to better protect lions in the future.

Cecil may be gone but his death is not in vain. How many people would have signed a petition to ban trophy hunting of lions two weeks ago without Cecil's story going global? Cecil's death implored hundreds of thousands of people to do just that. By week's end that number will easily climb to over a million.

Cecil's death has brought together people from around the world, from nearly every culture, religion and country to band together. Pretty powerful that one lion can untie us all in love.  Thank you Cecil for showing us how alike we all are and the unlimited power of human compassion. Cecil's story even made hilarious comedian, Jimmy Kimmel shed a tear on live TV.

This one act by one man and one hunting organization in a tiny pocket of the world has brought enormous awareness to the plight of lions. Cecil's death will inevitably save many other lions from meeting the same fate. It has to. It will. The majority has spoken. Innovative ideas are circulating as to how we can better protect lions.

Cecil's story will have a lasting impact. It has shown us, the super predators of this fragile planet how me may be better in protecting those that need protecting. May justice run it's course and may this also offer us the opportunity for radical forgiveness.

Please join nearly 378,000 others in signing a petition for Justice for Cecil and support Lion Research here www.wildcru.org