Pam Grout has written two powerful books, E-Squared and E-Cubed, of practical energy experiments that prove the 'Universe', 'God', or as she calls it, the 'Infinite Field of Potentiality or FP' exists. She says that not only does it exist, but it's on our side and loves us unconditionally.
I've read her books, done the experiments and they absolutely worked for me. But that was no surprise as I had tangoed with the Universe before. It all began with one tiny ball...

It was 2010, I had recently returned from volunteering in South Africa and was determined to write a book. This had been a goal I had long ago shelved. I announced my goal to those around me only to find that my enthusiasm was met with mostly skepticism. I began to write despite the critics (and there will always be critics).

It didn't take long before my own self doubt and fear joined the other voices, only mine were screaming things like, 'Why are you wasting your time?' and 'You can't write, you suck watermelons!' The doubt was paralyzing and soon I gave up my goal of writing.

A few days later I was hiking in a coastal rainforest close to my house. It was pouring rain and a grey mist blanketed the forest making it impossible to see more than a few feet ahead. Not surprisingly, my canine companions and me were the only ones on the trails. The outside world reflected exactly how I felt on the inside - cold, grey, alone and utterly defeated.
The more I hiked the angrier I became. I didn't want to give up writing but I needed a sign, you know, a sign.
So I asked, 'If I'm on the right path, if I should keep writing then damnit show me a sign.' Yes, I was really that rude and demanding, after all I never expected someone or something to answer me.
A few minutes later on a muddy section of trail I heard, well it was more like felt, a voice. And no, I hadn't been eating any mushrooms along the way...
It was this calm, jovial being that said 'look over there'.
Again, not really believing I was 'hearing' this I amused myself by stopping and looking where I felt I should. There was nothing there. The 'voice' said look behind that log and under the leaf. Again, purely for amusement I stepped behind the log and kicked up the leaves. And there, in the black mud was a tiny, bright green ball. There was nothing else around - just mud and leaves. But this little ball was like a beacon of faith or coincidence, I wasn't really sure but at the time it was exactly what I needed to keep writing. 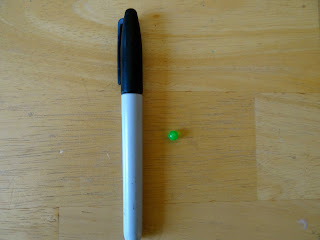 But self-doubt was relentless and every now and then when the writing got tough I would want to pack it in. So I would ask the almighty Universe for a sign and within a day or two - but usually within a few hours, I would find another one of these balls - on the sidewalk, on the step of the train as I was getting on, on my seat at a restaurant! I just had to ask. It became an inside joke between us - you know, the Universe and me. I would even request the color of the ball I wanted to receive: pink, orange, yellow, black - and he always delivered. 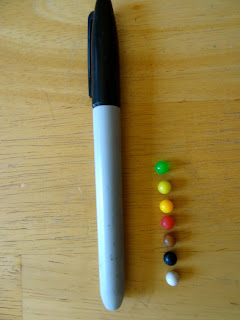 On one particularly difficult day I returned to the same rain forest and asked the Universe for a baby blue ball. I was hoping not to find one because on this day I was full of doubt about my writing goals and not finding a ball would let me off the hook and justify giving up on this 'ridiculous' goal once and for all (as my self doubt called it).
There was nothing on the trails. I was kicking up leaves and searching under logs like a mad man. Nothing. I was so pissed at the Universe. My self-doubt was smirking ear to ear. I determined that the little balls had been nothing but a coincidence and the Universe was indeed a fake.
I dragged my feet all the way back to my car. I opened the back for my dogs to jump in and when I closed the door something caught my eye. I couldn't freakin' believe it. I began hysterically laughing in the middle of the parking lot. There, stuck under the wheel of my car was a baby blue tennis ball. Not a tiny ball like all the others but a great big tennis ball. The Universe has a grand sense of humor. 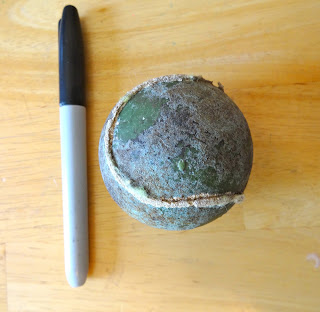 The little balls followed me to Los Angeles. I was chasing my dream - to find a literary agent and get published and take in some much needed sun. I sublet a dusty old walk up off Sunset Boulevard. The ad didn't mention roommates but I had plenty of them - cockroaches, ew!
The first night there it poured with rain. I walked to the 7-11 down the street and bought a cup of noodles and bag of Doritos for dinner. I didn't know anyone in this town. Feeling alone and a little naive I asked for a sign that I was in the right place.
The next day while walking across the dusty gravel parking lot to the dumpster something caught my eye - and then something else - and something else: dozens of tiny gold and silver balls. Thank you, thank you, thank you!
I even began to regard my roommates differently after that. 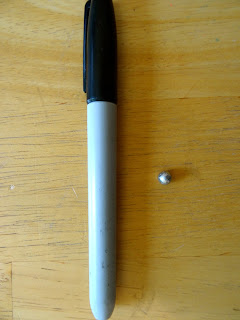 A few weeks later I signed a contract with an amazing literary agent. A couple of months after that a publisher expressed interest in my book. Nine months later I signed my first publishing contract with that initial publisher who turned out to be the perfect fit, she is awesome! All this was possible because I found my balls, so to speak.
Was it all just a coincidence? Maybe. But either way those tiny balls gave me courage to keep going. 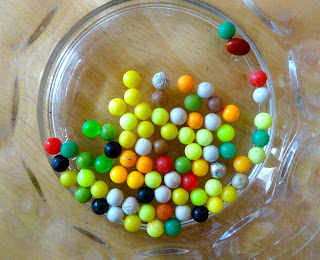