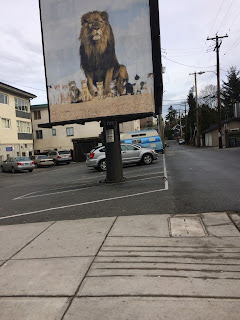 It’s five weeks until my TEDx talk titled, Playing with a Lion’s Testicles at the historic Queen Elizabeth theatre in Vancouver.

It’s been a long selection process: six months so far.
They started out with dozens of awesome and inspiring speakers, speakers who deserve the stage more than me, seriously.
Then they narrowed it down to 13 of us.

The process looked something like this:
1)    July, 2016: Written proposal outlining the tough, tangible, universal problem you are addressing.
2)    August 2016: TEDx Panel Interview, in the ‘hot seat’.
3)    September 2016: Draft 1 speech submission.
4)    Late-September 2016: Draft 2 speech submission (which was really draft 200).
5)    October 2016: Live reading before the panel.
6)    Late-October 2016: Notification that I have been selected (Holy Snap!).
7)    Late October – Now: 1,763,248 drafts of script written, stomped on, cried on and shredded. A marshmallow addiction is born (wtf?), they are gluten-free!
8)    November and December: Two live rehearsals before the panel. Coaching by three talented and tough TEDx coaches. (This made it worth every tear, the coaching was first-class and a huge learning curve).
9)    January 1: New Year’s Resolution to lose the extra ten pounds of ‘marshmallow’ weight before March 4.
10) January 23: Deadline to submit FINAL speech script and Power Point slides after seven months of eating, breathing and sleeping TED.
11) January 24: Still haven’t lost an ounce of marshmallow weight.
12) January 24: Doubt and Public Humiliation ‘ghosts’ start to surface.
I want to write draft 2,345,971 of my script but it’s too late. It’s been submitted to the producer, deadline has passed.
Butterflies have overtaken my stomach and while I am sitting at a red light having a wee-bit of a panic nervous attack. I look over and see the billboard pictured above. It’s HUGE. There are no words. Just a lion (remember my speech title?). I don’t know if he’s saying,
“Come, play with my testicles.” (Which means have COURAGE) or if he’s just saying, “Roar”.
Either way, I take it as sign, a reminder to have the courage to have the courage, to remember that this talk is not about me. That I’m not perfect and that’s OK, but I do have courage to battle my ghosts.
I’ve spent the last seven months writing this talk for the person who is in the dark and lonely valley battling their ghosts, who is perhaps on the verge of giving up on their dreams because it’s too hard, or they have ghosts haunting them: public humiliation, doubt, failure, or even success.
We’ve all stood in the shadow of ghosts, but the problem with ghosts is no matter the type, they all eventually become ghosts of regret.
This is a universal problem. 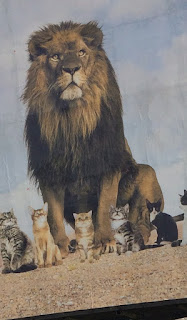