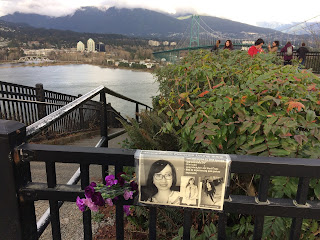 Her family made pleas to the public for help in finding her as she was suffering from Post-Partum Depression. Her husband said,
“Please come home Florence, let me hold you again, everything will be alright.”

The next day footage emerged of Florence buying a banana and Gatorade from a convenience store on Denman street, downtown Vancouver and the family was hopeful asking the public to look for Florence in the area.

When I saw this footage it told me that Florence was utterly exhausted because of what she was buying. It also told me there was hope.

PPD and PPA reportedly effects 10% of women. Bullshit. The truth is, it effects a lot more women than that – some informal reports say as high as 80% of women are effected but only 10% ever ask for help.
The rest suffer in silence for a number of reasons, but the biggest being that they feel guilty for what should be one of the happiest moments in life but it isn’t.

When in reality having a baby is the most difficult thing a women’s body and mind will ever go through. Physically, emotionally, hormonally, mentally – it’s chaotic yet we have these beliefs that if we’re not beaming with gratitude and have bouncy, perfect hair and can get back into our pre-pregnancy jeans by the time we leave the hospital (if we don’t home birth), then we must be monsters.
A retired maternity nurse told me that 50 years ago they use to tell women it takes two years to recover from having a baby: one year to recover from pregnancy and another year to recover from the first year having a baby.
Imagine if we were still told this today how much less pressure we may feel?

Florence did everything right, she was a nurse actually and she told her doctor she was suffering and started taking anti-depressants.

The day after the convenience store footage appeared, Florence’s car was found at Prospect Point in Stanley Park, a well-known lookout point that stands over 300 feet above the sea below.
Inside her car the banana and Gatorade untouched.

Opened on July 27th, 1939, the Prospect Point Signal Station helped alert vessels about tide conditions, winds, and other potential hazards, it was a beacon, that would help lost souls find their way safely home and that’s what it did for the strong, beautiful yet fragile young mother named Florence Leung, it helped her find her way back home.

Two weeks later her body was found off the shores of Bowen Island where presumably the current had carried her from Prospect Point.

I went to Prospect Point today to leave purple carnations for Florence and there still remained a tattered sign from the family, pleading for help to find their Florence, the young mother who was suffering from Post-Partum depression. The tragic ending to the story now written.

May her soul rest in peace, may her family, her husband and her baby boy find peace and solace. There are no words for such a tragic and heart-breaking loss.

So what can we do? How can we help new mothers who are suffering? Well, I know what we can’t do. We can’t let this be another tragic story that ends here.

But what we can do, is let Florence’s story change the way we view new moms and how we treat them.

First, if we know the new mom, drop off food: a prepared meal, and easy-to-eat healthy snacks. New moms are energy deprived and often don’t have time to eat, grocery shop, let alone prepare a meal for their family. So forget that baby-sized Tuxedo you bought for her four-week-old, drop her off a meal instead.
Ask her to go for a walk, walk with her, let her talk. You don't have to have answers, just an ear.

Second, acknowledge new mothers, especially the ones you don’t know but see on the street. When you see a new mother, look in her eyes and ask her,
“How are you?”
You don’t need to ask about the baby – trust me, the baby is well looked after. But the mom probably isn’t. She’s just trying to make it through the day. Just being able to get out the door with a baby was a huge accomplishment and she never takes a second to check-in with herself.

And when she laughs and says,
“I’m fine,” you say,

“It’s OK not to be fine when you’re doing the toughest job there is but one-day you will feel like yourself again.”