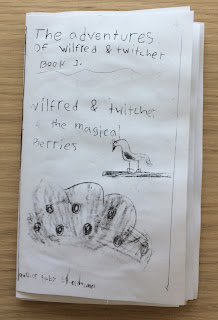 Walking through Kitsilano neighbourhood on this Sunday morning, my dear friend Penny and I happened upon a courageous young girl seated at what we thought was a lemonade stand.

But this little girl was not selling lemonade, she was an eight year old self-published author selling copies of her books, greeting cards and stickers.

My friend purchased two of her lovely cards but I gravitated to the books she was selling for $2.50.
The books were still wet with glue, because she had bound them together by hand. She is the author and illustrator and as you will see by the photo below of her ‘about the author’ page, Ruby is eight years old and got the idea of writing these books because she has two pet rats: Wilfred and Twitcher, who happen to be the main characters in her book series. Yes, she has written a series. She has written a series. A series. A %&@^$ Series!!!! 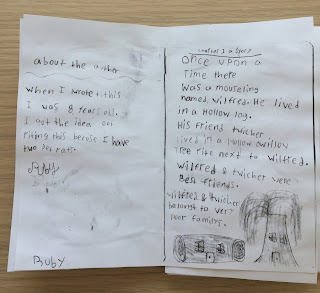 I bought the books because:
a)    Gotta support other starving writers (but Ruby is not starving because at $2.50 a piece she is making more than double what I do as a traditionally published author!),
b)    They are absolutely adorable and so is she.

But what I didn’t expect was how well written these books are. She followed Joseph Campbell’s Hero’s Journey monomyth almost to a tee. 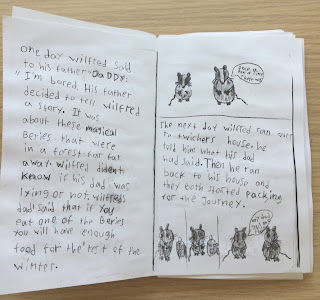 Wilfred and Twitcher started off in their ordinary world where we learn they both come from poor families who struggle to put food on the table. Twitcher is bored, and tired of his circumstances, the rumblings of an adventure to come.
The call to adventure came when Twitcher asked Wilfred to go find the magical blue berries that his Dad had told him about.
The meeting with the mentor came in the form of a magical red bird named Scarlet who took them part way on their adventure, but then, this was as far as she could take them…
They met enemies and allies, went through tests.
There was a central ordeal in the BEAR-LION cave where they nearly died at the midpoint but managed to escape.
They seized the sword i.e. the magic blue berries.
Made the road back home with the help of a raccoon where they returned with the elixir – magical berries that produced non-stop food that would last them a lifetime so they’d never go hungry again!
All this in a 10-page self-published book of an eight year old creative genius named Ruby.

This creative genius has not yet been tainted by doubt, fear and nay-sayers; in fact, her mom and dad were out there with her helping her count change (and controlling the crowd that had gathered). She is an inspiration to the rest of us who ‘know too much’.

I was thrilled to snatch up two copies of her books, and have the author sign them because, as her mom said, this is the last sale of the season as Ruby will be taking a year-long sabbatical in Berlin starting next week. No doubt she will find lots of inspiration for the further adventures of Wilfred and Twitcher. Go Ruby!

Check out the questions and answers page at the end of the book and the preview of book two. 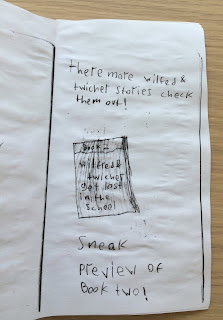 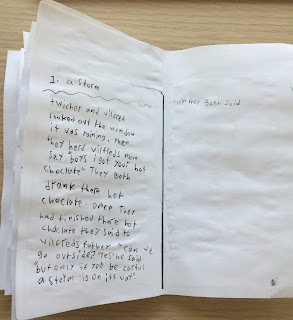 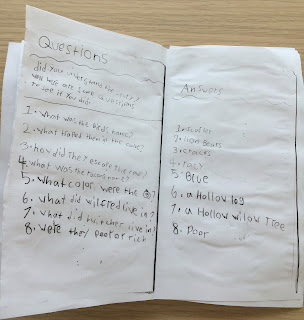