Tuum Est: It's Up To You 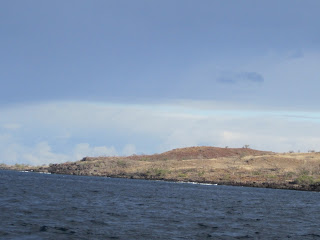 Two years ago I was in Kona and on our last full day we booked an excursion to go swimming with wild dolphins out in the open water.
We arrived at the marina at 6:30 am and the weather was the pits. Heavy rain and fierce winds and I don't know what was blacker: the sky or the ocean.
I didn't want to go anywhere near the sea so I was tremendously relieved when, walking across the parking lot, I overheard tourists saying that their excursion had been cancelled.
We went to our boat anyway just to check in and say thanks anyway. We got there and were surprised to see weary eyed tourists climbing aboard a small boat.

"Don't just stand there, come aboard" a crotchety old seadog barked.
"Isn't the trip cancelled due to weather?" I asked.
"No. The other boats cancelled but WE are going out. So if you're coming climb aboard already,” he snapped.

My friend and I were still half asleep so we followed his orders and clambered aboard like everyone else.
Within minutes of setting off I knew we had made the wrong decision. I was so seasick my head was in a permanent position 'overboard'. I tossed everything and then some. But I wasn't the only one a shade of green. Our fellow passengers were all united in a battle to stay on-board and alive. Candied ginger was passed around with cans of ginger ale - for me those were quickly tossed as well. The swells were so huge that each time the boat powered over one it landed with a huge CRASH.

"How much longer?" passengers begged for a positive response from our grouchy and seemingly unaccommodating captain.

30 minutes later we finally arrived. But that wasn't much of a condolence considering there were six foot swells of black ocean waiting at this bay. We were about 500 meters from shore and were warned not to go anywhere near the rocks - as that would result in 'unfavorable results'.

But no one was eager to jump into the cold blackness - even if there were wild dolphins somewhere below.

"Hurry up, we're not here all day!" he barked again.

One by one weary tourists suited up and plunged themselves into the blackness, immediately disappearing from site in the rolling swells of fear. Finally there was no one left on the boat except for me and that grouchy old captain and that was the way it would stay because there was no way I was going to get into that black water and besides I was too sick to move.

"What about you?" he shouted.

"I'm not feeling well Sir. If it's alright with you I'll just wait on the boat and just enjoy, uh, well I'll just wait here if you don't mind..." He was almost as intimidating as the black water.

And here comes the point to this story:

"Geez. You can lead a horse to water but you can't make him get in the damn water and swim with the dolphins." he said.
"But I'm sick."
"Then get in the water and you won't feel sick anymore. Once you see a pod of dolphins at your feet you'll forget all about everything else. But hey it's Up.To.You."

90 seconds later I too was leaping off the back of that boat into the black swells - fear be damned. And guess what? The second before I hit the water my seasickness was gone. The storm, the swells, the blackness - none of it existed when a few minutes later I was swimming with wild dolphins. Pure magic.
Tuum Est.