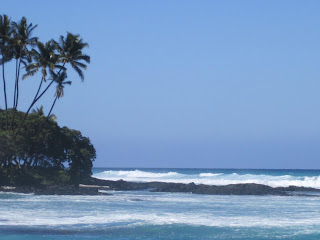 I came to Hawaii to dive but it never came to pass. The trade winds have been restless, the sea swelling in revolt. Instead I stole away with Nui Pohaku Adventure Tours and went on an amazing 15-hour excursion to the active volcano, Kilauea in the Hawaii Volcanoes National Park - it's over 300,000 acres.
As the black curtain of night lifted we were gifted with a magnificent sunrise over Mauna Loa. A long, gentle sloping volcano her total height exceeds Everest by nearly a mile.
Breakfast was at the Southern most bakery in the USA: the Punalu'u Bakeshop. They are famous for their Malasadas, deep-fried dough covered in sugar and injected with cream, chocolate or my favorite, guava. Indulge. They are worth every last calorie.
Once in the park we went to the summit of Kilauea and observed Halema'uma'u Crater that has a boiling lava lake at its center. The VOG (volcanic fog) was blowing north so we had breathtaking views of the island's other volcanoes including Mauna Kea, the tallest mountain in the world.

We followed the crater trail through a rain forest that was full of lava tubes, one we even were able to walk through and others hidden below the rain forest floor with dangerous 'sky lights' that many people fall through each year.

We walked across a massive lava field that buried a town (160 feet below) back in 1960. Finally we ended up at the sea where the lava at 2100 degrees met the sea at 70 degrees, causing it to shatter leaving behind a beautiful black sand beach.

The day was full of interesting bird and plant species, to see wild orchids grow freely in a field was glorious. 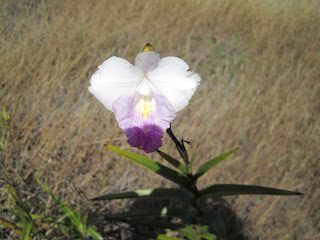 As spectacular as Mother Nature's exhibits were though, the best part of the tour was the company. There were four of us on the expedition, an engaging eye surgeon and his wife from Calgary and another Melissa from Australia. Our tour guides, Pat and Tyler filled our minds with a buffet of facts, folklore and an ever so tantalizing peak into what it means to live in paradise. Tyler was born and raised here. Living in the path of a volcano that can boil over at any moment is what keeps the locals unmaterialistic and focused on their true wealth: family and friends. Pat lives in a tent on a plot of land she is clearing by hand where she will one day build her dream tree house. She has no electricity or running water and she's in no rush.
We shared lots of laughs and at the end of the day a great meal in a tiny pocket of the island at the end of a dead end street at Uncle Robert's beach shack - and a shack it was. After continually fishing tiny flies out of their wine, the couple finally surrendered, accepting the protein as added nutrition. The meal was simple: veggie burgers and salad, the taste, however, was almost as magnificent as the sunset before us. The veggie burger was chock a block of rich flavors but the real treat was the freshly baked bun that housed it. A well-fed gecko inconspicuously eyed our plates from the ceiling above our table. Desert was ice cream made in Maui.
After dinner Tyler brought us back to the Halema'uma'u Crater where our tour began only this time the lava lake glowed orange. Above us the equator's window to the universe shone bright with both Northern and Southern constellations.

By the end of the day we had covered nearly 700 miles safely in the hands of our gracious guides. As for scuba diving, there's always next time!
©Melissa J. Haynes, Author and Conservationist