Preparation for the Battle at Runyon Canyon 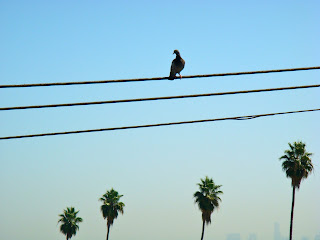 “I’ll be right back, I’m going up to the dead drop,” I said.
“What’s that?” asked my six-year-old nephew Will.
“The roof”
“For what?” he asked, still seemingly uninterested.
“The sergeant just dropped my gear”
“What gear?” he was temporarily distracted from fighting with his much younger brother over LEGO.
“My spy gear” I said, reaching for the door.
“Can I come too?”
“It’s too dangerous up there, droids everywhere.  If they see you they’ll shoot you”
“What?!?” he tossed the disputed LEGO aside and chased after me.
I rushed out the door, closing it quickly before he could reach it.
Five minutes earlier an LAPD chopper had hovered over the building.  This was right before world war three was about to break out between my nephews.  It was the ideal diversion.
I started up the dark and dingy staircase to the rooftop one level above. 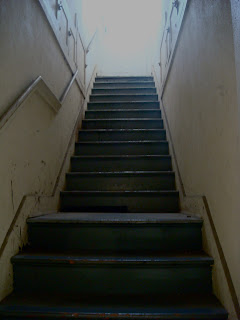 “I can’t see!  Wait for me!” Will chased me up the stairs.
I pushed open the heavy steel door and stepped onto the roof.  I had never been up there before because tenants don't have access.
I quickly searched the roof.  My searching was met with the surprised eyes of a colony of pigeons.
“There it is, wow, that’s a big delivery.  Grab that end down there please,” I pointed towards the middle of the roof, keeping him away from the unprotected ledge.
“I don’t see anything,” he said.
“Oh right, I forgot.  Only secret agents can see invisible spy gear, never mind, I’ll get it.  Just hold the door open for me please”
“Wait!  Now I see it.  I’m an agent too!” he screamed.
He leaped over exposed water pipes to the spot I had pointed to a moment earlier, then struggled to lift the heavy package. 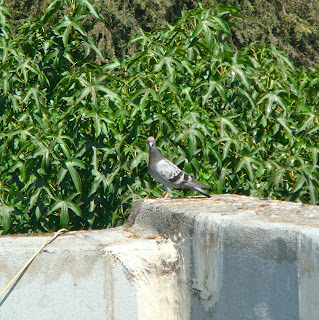 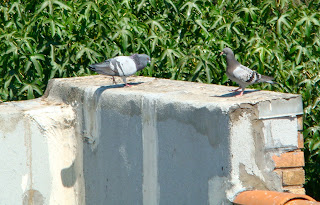 Agent Pigeons
“Why are there so many pigeons up here?”
“They’re agent pigeons, they’re guarding the package”
“Oh”
“Whatever you do, do NOT drop this package” I whispered.
“Why?” he asked, puzzled.
“Can’t you see the writing?  It says CAUTION: GRENADES.  If one of those goes off it will blow up the whole building!”
“Oh, yes now I see it.  I won’t drop it,” he said, his face turning serious with intent.
We shuffled sideways towards the staircase.  Will’s eyes were glued to the package in his hands as he now realized the importance of this task. 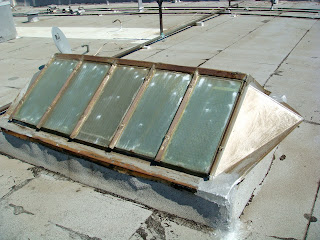 “Quick, take cover behind the skylight – RUN!” I shouted.
“Why, what is it?” screamed Will.  Even though scared, he kept a hold of the package as he ran for cover.
“Droids…they’ve seen us and they’re firing!” I yelled as I crouched down on my knees.
“I don’t see them – or the bullets!” he whispered looking around.
“That’s because they’re invisible!  Here put these on, they’re spy glasses – you can see everything invisible with these!”
He reached for the glasses and put them on quickly.
“I see the droids!  They’re right there!” he shouted as he pointed to the neighboring rooftop.
“OK, when I say three make a run for the stairs: 1…2…3 GO GO GO!” I yelled.
We sprinted through a nesting cluster of pigeons that cooed and flapped their wings angrily at our trespass.  We then carefully maneuvered the package of explosives through the doorway and down the steps. 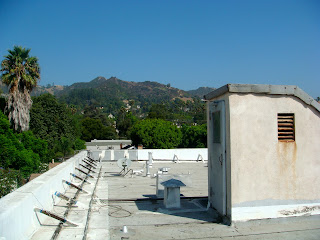 Runyon Canyon in the distance
When we got back into the apartment we rested the package just inside the doorway.  I opened the door to the hall closet.
“I need to get some stuff out of the secret storage compartment at the back of the closet – can you see it?”
“No”
“Put your spy glasses back on”
He took them out of his pocket and put them on.
“Oh, now I can see it – can I open it?”
“Do you know how to?”
“No, how?”
“You have to use your spy paintbrush to paint a handle, but you have to use pink paint, then you can open it"
“Oh.  I forget where my spy paintbrush is…”
“It’s always right here,” I said as I reached behind his ear and pulled out an invisible paintbrush.
“Oh yeah, now I remember” he said, grinning as he snatched it from my hand.
“Do you know where your paint pots are?”
“No, where are they?”
“Look, here” I pointed at the inside of his arm, “all your colors are here: pink, turquoise, yellow, crimson and silver”
“Can I use silver?”
“No, it won’t work to open the door”
“Oh, OK”
He dipped his brush in the paint and then purposely painted an oversized handle on the wall.  He replaced the brush behind his ear and then looked at me with big, questioning eyes.
“Go ahead – open it”
Apprehensively he turned the handle and slowly pulled open the cupboard.
“Careful nothing falls out – it’s really full,” I whispered.
He opened it just a few inches and peered inside.
“WOW!” he gasped.
“What do you see?”
“There is soooo much cool stuff in here!” his eyes were sparkling “there’s guns and missiles, walkie talkies, gear belts, stretchers – there’s even an army tank in here!” he shrieked.
“I have to go on a mission now, do you want to come with me?” I asked.
“Yes!”
“Very good.  Pass me a gear belt”
He handed me a belt that I quickly clipped on.  He pulled one out for himself too.
“AK47”
“Here” he passed me the gun and I placed it on my back, he did the same.
“Rocket launcher”
“Here”
“Extra missiles”
“Here”
“Hey, handle those carefully!”
“Oh…sorry”
“Grenades”
“Here you go, but don’t drop these auntie – you’ll blow up the whole building”
“Stretcher”
“How are you going to carry this?” he asked, his arms were spread wide holding an imaginary stretcher.
“It folds up like this,” folding it into a small bundle, I then put it in my pocket.
He followed suit.
“Walkie talkie”
“Here”
“Survival pack”
"Here"
“Dagger”
“Here”
“Jet Pack”
“Here”
“Pre-roasted marshmallows”
“Here”
“Chocolate covered lizards”
“Uh, here?” he held out cupped hands.
“Oh no!” I screamed.
‘What?!?” he screamed back.
“That one’s still alive – get it quick!”
“Where is it?” he screamed.
‘It’s on your head – quick catch it and eat it!”
“I don’t want to!”
“It’s covered in chocolate!”
“But I don’t like lizards!” he screamed
I plucked it from his hair and held it up high above my mouth “Are you sure you don’t want it?”
“You can have it,”
“OK, we are ready to go”
“But what is our mission?” he asked.
“Our mission is to go to Runyon Canyon.  Today there is going to be the biggest droid battle of all time.”
“Why?”
“Because the droids are planning to blow up the wish box at the top of the western ridge, we must stop them”.
“You mean there’s a wish box fairy who lives at Runyon Canyon?”
“Uh…yes, I suppose there is”
“And, agents go there to make wishes?”
“Exactly, hurry up, let’s go”
“And if the droids blow up the wish box we won’t be able to ask the wish box fairy for LEGO guns?”
“Right”
“And the sergeant won’t be able to get a LEGO police helicopter?”
“Sure”
“Are there going to be other agents up there?”
“Yes, hundreds of them”
“Really?”
“Yes and bomb sniffing dogs, rattle snake agents and even scorpion droids”
“Can we drive the tank up there?”
"Only if you drive"
"Cool!"
To be continued…