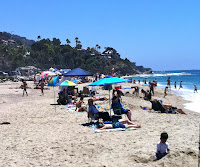 Life’s a beach.  I’m sure there’s just as many interpretations for this expression as there are grains of sand.  At Treasure Island in Laguna yesterday, my own became evident.
All the elements were at their peak, the sun, sea, wind - even the sand was fierce.  It was only the scent of sunscreen that dared venture out from underneath the brightly colored parasols that covered motionless bodies.  Others exposed themselves on oversized beach towels to the over-zealous sun who joyfully seared their oil-covered bodies to a crisp.
Down at the edge of the sea is where the real action was.  Children, skim-boarders and grown-ups alike played cat and mouse with the sea.  First chasing her waves then turning and sprinting for dry sand when she chased back.  Growling and growing, she picked up speed before finally pounding the beach, each wave more aggressive than the last, spitting foam and spray into the faces of those who tried to evade her.  The chasers were careful not to let her past their knees for fear of all the unknowns she harbored.
There were some, a rare few who did not run from the sea - instead they embraced her.  Unflinching they knew there was no time for second thoughts, apprehension or insecurity.  If she sensed their fear she would swallow them.  And in that moment, right before she would crush them, they took a giant dive of faith head first into a brute force that could have ended in disaster or even death.  What they found on the other side was a calm that could only be earned by confidence and fearlessness.  Safe from the dangerous shore, they had learned the delicate art of allowing.  Instead of fighting the current, trust allowed them to enjoy the freedom and power of the ebb and flow of the sea.  The chasers were oblivious, instead distracted by a never ending supply of chasing and being chased.
Dive in.