My Giggling Hollywood Apartment - And The Squatters Who Call it Home 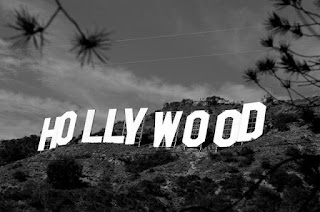 My Hollywood apartment was built in 1910; it's got over 100 years of stories to tell.
As I lay here staring at the cracked ceiling I wonder how many before me did exactly this - wondering if their dreams would ever come true.  How many have heaved open these windows whose ropes screech and looked despairingly into the dirty alley, wondering what they're doing here?  There's a lot nicer places to be than Hollywood.  Cleaner places.  Friendlier places.  Solid places.  The alley, filled with dumpsters, the stench of piss, and the crooning of pigeons has a way of instilling fear into even the most confident man.  It makes him feel as out of place as the odd seagull dumpster diver who flew up from Santa Monica looking for better eats.  But something kept the dreamers here.  Was it the tall palms lining Sunset Boulevard to the South - easily visible above the low buildings?  Or was it the mansions to the North perched on Mulholland drive?  Surely those people were dreamers once too.


When I sweep these hardwood floors I wonder how many cocktail parties they've seen.  How many times has the original honeycomb floor in the bathroom been scrubbed?  And why did they put such cheap white linoleum in the kitchen - the kind that never comes clean.

How many people have climbed through this bedroom window to sun themselves on the tiny enclosed patio shared with the neighbour.  Now it's abandoned; it's only inhabitants being a lone palm in his corner and a nearly dead plant in mine whom I've named ET - for he looks like something from outer space.  I will do my best to revive him.
From my bathroom I can see his, my window is crystal clear glass - his is frosted for privacy.  There is no cold water, nor is there hot - except mid day in the summer: then there's no need to boil a kettle for tea.  The shower has less pressure than a flat tire and spits out a single stream.
In the corner of the kitchen sits an old water heater that gurgles and burps in the middle of the night.  The aged gas stove has only one setting: high.  There's no air conditioning nor is there a pool.  Heck most of the time there's pigeons in the hallway - who aren't discreet with their droppings.


But what these walls do have is have character and a lot of stories to tell.  My relatively short time here will be another one of those stories.  There are times when I'm sure I even hear these walls giggling at me, like on my first night here.
The sounds coming from my bedroom closet awakened me with a start.  I flicked on the light and confronted my tormentor: an overfed cockroach who was more aggressive than an African lioness.  Being a conservationist at heart I couldn't kill the intruder and instead spent several minutes chasing him, trying to outsmart him.  I eventually triumphed, trapping him under a martini glass.  I carefully slid the most recent ST*R magazine underneath (finally a good use for the gossip rag) and threw him out the window.  A perimeter check unveiled another squatter.  This one more agile and intelligent.  His hiding spot was on the bathroom ceiling, far out of my reach.  I closed the door, sealed the gap underneath with towels 'jailing' him inside.  I silently prayed he would disappear by morning and that I would not need to use the facilities during the night.  That's when I heard those walls laughing at me, followed by a faint whisper that said Hollywood was built on dreams, fuelled by dreamers.