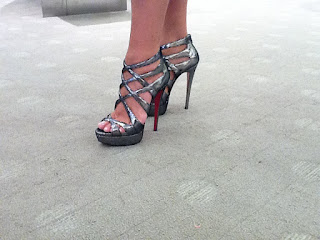 Finding Love in Beverly Hills
They say when we stop looking for love it will appear. I can attest to this statement as truth for it happened to me on a recent Sunday afternoon like no other.
The day started off routine with brunch and one too many bagels followed by a short drive to Neiman Marcus in Beverly Hills. What I didn’t know that fateful morning as I made my way West was that soon I would be swept off my feet by a brand new love.
The introduction came when I lazily strode through the shoe department, uninterested in the prospects before me. I was approached by an eager associate named James who could sense my desire for passion and excitement. He said he had just what I needed and guaranteed it would make me scream with joy. Intrigued, I anxiously awaited for James to reappear from behind the draped doorway and when he did, it was love at first sight.
His name was Christian Louboutin – a name I shall never forget. James carefully removed him from the gold box and placed him in front of me. I was frozen in a trance by his pulchritude and strong features in all the right places, even the curved arch of his spine gave me goose bumps. I removed my stockings and slipped him on. The moment when he wrapped his strappy, sparkly appendages around my ankles I was hooked, addicted to his sex appeal. I immediately knew that he completed me when his five inches brought me to a place no Jimmy, Alexander, Cavalli or Blahnik ever could.
This was not going to be a fling or fleeting crush; this was true love, a love that coursed through every cell of my being and grew with every movement we made together as one.
I paraded him from one end of the soft carpeted shoe department to the other, careful not to scratch his bright red soles, stopping in front of each mirror reconfirming that we were a perfect match, bringing out the best in one another – me, his steely shine and he lifted more than just my spirits. I could see the other women looking at me, they knew what a woman in love looked like. Each one gave me the nod of approval as I sashayed by – desperately searching for love themselves within the boxes piled in front of them. And just as I was making plans of where my new love and I would spend the next few nights together – Skybar, the Edison or Cabana Club, my thoughts were interrupted by James,
“Will you be paying cash or credit?”
I had forgotten that this type of love came with a price tag. I turned over the box to see the price, which set my heart into an entirely new rhythm of palpitations – not the endorphin driven type the shoes gave me. Mr. Louboutin was no cheap date; his price was $1200 plus tax. It was then that I realized this was a love not meant to be and like two ships passing through the night, our encounter would be brief albeit passionate. I was not the only one distraught by our short lived romance; even our matchmaker James seemed disturbed stating that Mr. Louboutin would not be on the market long and I was a fool not to snatch him up while he was still available.
I have dreamt of my love many times since that fateful Sunday afternoon, even returning hoping to have him embrace me just one more time but he has since moved on and gone home with another woman who fell just as deeply in love with him as I did.
The shoes may be gone, but this affair has reinstated my belief that love awaits around every corner and appears when we least expect it – even in Beverly Hills.
This piece dedicated to PB – may you find true and lasting love.
Adventures Await!
© Melissa J Haynes